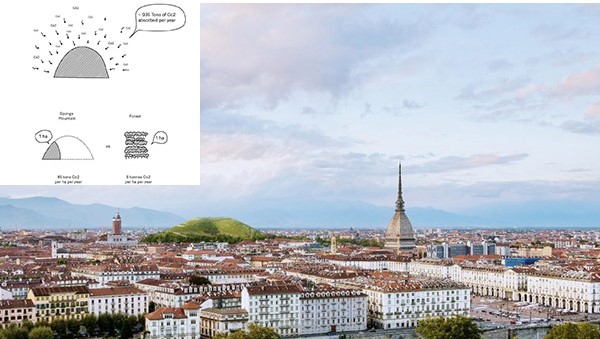 Artificial mountain made of soil could soak up pollution in Turin

Sponge Mountain is a proposal by architect Angelo Renna for a 90-metre-high mound of soil, which would absorb carbon dioxide from the air in Turin. Amsterdam-based Renna imagines the artificial mountain being made out of the soil excavated during the construction of a 170-mile railway tunnel, planned between the northern Italian city and Lyon, France. Sponge Mountain would soak up the carbon dioxide in the air and also provide a new park for Turin. It would passively soak up the carbon dioxide being released into the atmosphere by industry and traffic, locking it into the soil so that it no longer contributes to climate change. Turin's residents would also be able to enjoy it, as it could be planted with trees and have pathways cut into it, to transform it into a city park. 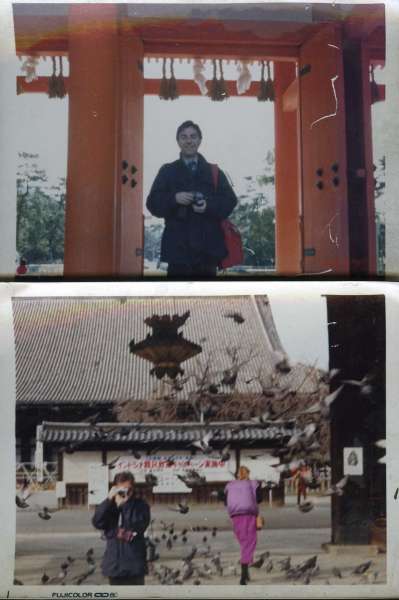 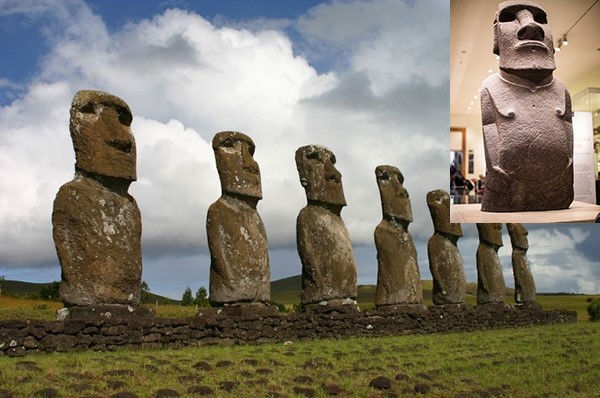 The eight-foot-tall Moai sculpture at the British Museum is called Hoa Hakananai’a, which translates to “the stolen or hidden friend.” This name is fitting, since the four-ton statue was stolen from the island in 1868 by Royal Navy captain Richard Powell, and presented as a gift to Queen Victoria. She donated it to the national museum in London in 1869. Now, as reported by the Guardian, the Rapa Nui people, indigenous to Easter Island, would like their statue back, please and thank you. As Easter Island sits about 2,000 miles off the coast of Chile, advocates for the reclamation and restoration of Rapa Nui culture have petitioned the Chilean government to arbitrate on their behalf for the return of the work — which is not only considered an object of sacred worship, but believed to house the spirit or mana of the depicted deity.

New Zealand’s Most Beautiful Train Ride Is Reopening in December

The Coastal Pacific Train is back after being closed for two years after the Kaikoura earthquake destroyed the tracks along the scenic route. When the 7.8 magnitude Kaikoura earthquake ripped across the northeastern coast of New Zealand’s South Island in November 2016, it destroyed homes and roads and sent miles of the Main North Line’s railroad tracks into the sea, ending one third of KiwiRail’s scenic train rides in the region. Although the Main North Line was reconnected in August 2017 for freight trains to help remove rubble from the subsequent landslides, the scenic Coastal Pacific Train is finally reopening on December 1, 2018, to make the six-hour journey up the scenic Pacific Coast of the South Island from Christchurch to Picton once again.Along the 61-mile route, you’ll take in the scenery of the Kaikoura mountain range, the rocky beaches near Oaro, as well as pass through 22 tunnels and over 175 bridges. Each ticket includes a seat in a train car with panoramic windows and skylights built to maximize the views, but if you’d like, you can also take in the scenery from the open-air viewing car to take pictures sans window glare. 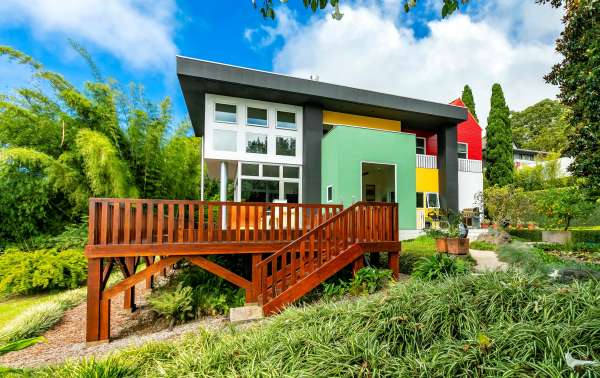 One of Ettore Sottsass’ commissioned residences has recently hit the global market. Located in Kula, Maui this iconic build, referred to as the "Sottsass jewel" is being offered for the first time.

After heartfelt consideration, the Owners are releasing their tenure. Sottsass was truly vested in the build. Exploring Maui, Sottsass was inspired by the deep blue Pacific ocean to the sands of Maui's beaches. Every element was designed with a purpose and an intention. Sottsass, too, designed the organic landscape which graces the property. Mr. Sottsass also designed flatware, dinnerware, glassware and other objects for the home, which are being offered as a separate sale to the fortunate new Owner. The home and property has been revered by the Owners since its inception and is in immaculate condition. “Extraordinary” and “Iconic” rightly describe this commissioned build. 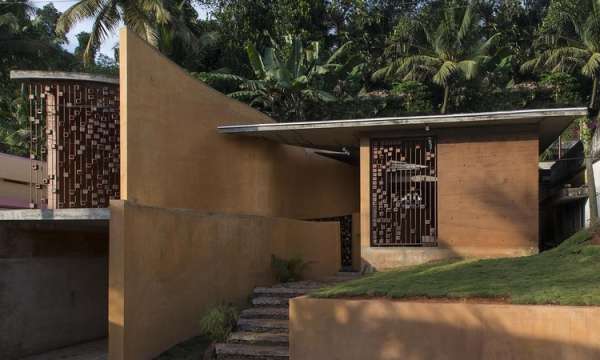 Text description provided by the architects. Nestled in a quaint township, is this rammed earth residence for a family of six. The site was at a slope with remnants of many demolished buildings.  Maximizing the given area the building is set in multiple levels to accommodate the family and to meet the client’s dreams in the most feasible way. This house employs recycled and eco-sensitive materials in its making with much care all the while ensuring that the material limitations are overcome and an expressive architecture is allowed to emerge from the constraints. The Debris wall is built over a discovered foundation and with materials that are recycled from the site. The coconut shell filler slab enables the architect to reduce concrete in the same. While the house uses numerous alternate technologies, there is a certain whimsy and playfulness in its design. 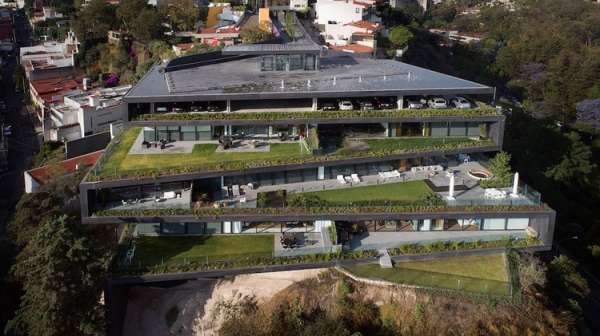 Text description provided by the architects. This luxury residential project enjoys a privileged location in Mexico City and peerless natural surroundings. The site has a very rugged topography so it was decided to integrate as far as possible the architecture to these natural formations, with the aim of respecting the environment and exploiting the extraordinary panoramic views of the city that can be seen between the vegetation. The architectural concept is based on a linear element which folds itself over the topography in a right-angled zigzag shape. Each fold responds to different needs and contains the spaces for the five departments, with large terraces, amenities and parking. This resulting piece of four levels, as it adapts to the ground, is transformed into a structure element (like a wall or slab) or an open plaza or terrace. A solution that creates an elegant and subtle shape with a clear horizontality between the native vegetation of the context. 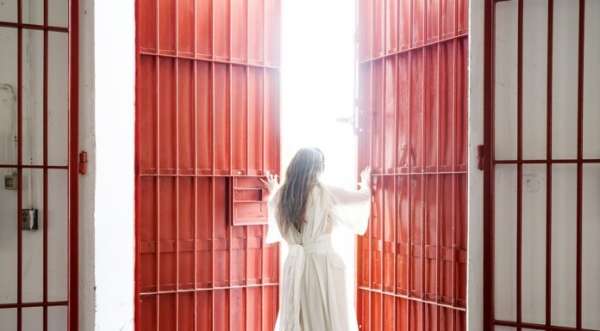 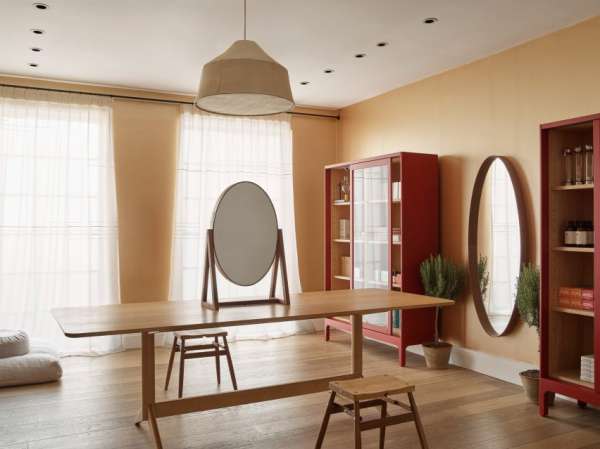 Goop, the lifestyle and wellness brand led by actress Gwyneth Paltrow, has opened its first pop-up store in London featuring California-inspired interiors by Fran Hickman.The Goop store is located in the affluent Notting Hill neighbourhood, nestled among a row of high-end boutiques along Westbourne Grove. It is the wellness brand's first pop-up space in the UK. Previously they have only opened temporary stores in US cities including in Dallas and New York, while maintaining a permanent Goop "lab" in Los Angeles.Walls in the beauty department, which sits at an elevated level at the store's rear, have been painted gold to reflect the warm climate in California. This room has been dressed with red-frame cabinets that display makeup and skincare products, and large circular mirrors. ph Fran Hickman 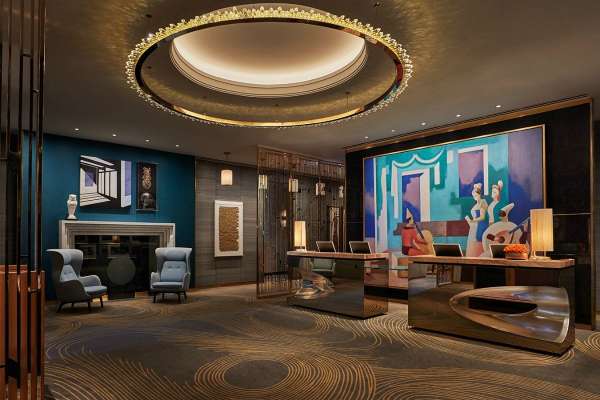 The city is reconnecting with its storied architectural roots. Now take all of these developments, put them into hotel form, and you have Viceroy Chicago. Located in the heart of Chicago’s ultra-affluent Gold Coast neighborhood, the hotel is in the thick of the posh restaurant scene — bolstered by Viceroy’s own restaurant and rooftop lounge — and was built on the former site of the historic Cedar Hotel (you can see the original 1920s brick and terracotta façade incorporated into the Viceroy’s design). It’s official: The Second City is done playing second fiddle. A blend of Art Deco and mid-century modern decor lends each space a glamorous, retro vibe and captures the former glory of the 1920s-era Cedar Hotel, which closed in 2014 to make way for Viceroy Chicago. The Cedar Hotel’s original brick and terracotta façade was incorporated into the base of the Viceroy’s sleek, 18-story glass tower. 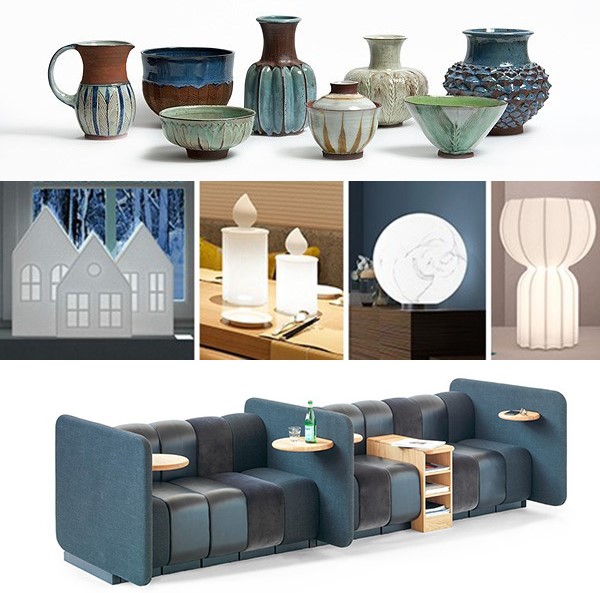 Work doesn’t have to tie you to an office desk. Meetings don’t need conference rooms. BOB Job, is the perfect solution for a casual and creative workspace: a sofa system which can be configured in any conceivable way.

Add tables, shelves for magazines and documents, and why not plants and flowers? And of course partitions for private conversations and face-to-face meetings. If BOB is the ultimate sofa system with an unsurpassed buildable flexibility that can adjust to whatever space and endow it with character, then BOB Job is the crowning feature: the possibility to cater to any imaginable need. Add-ons in oak, ash, and stained variations together with six different padded partitions offers privacy and an abundance of different spaces in both offices and public spaces. 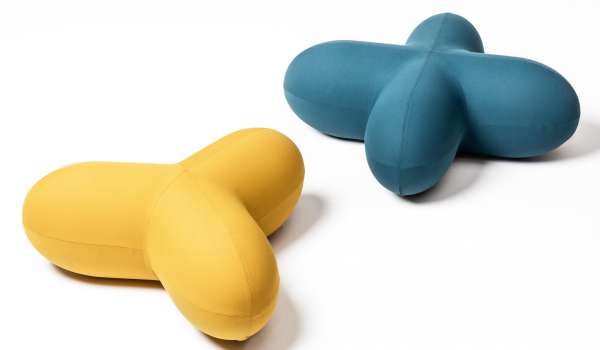 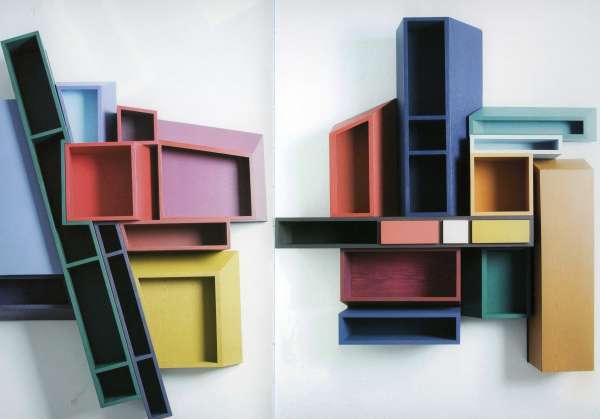 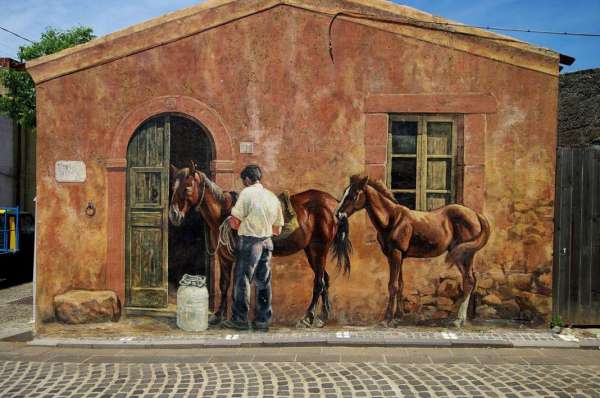 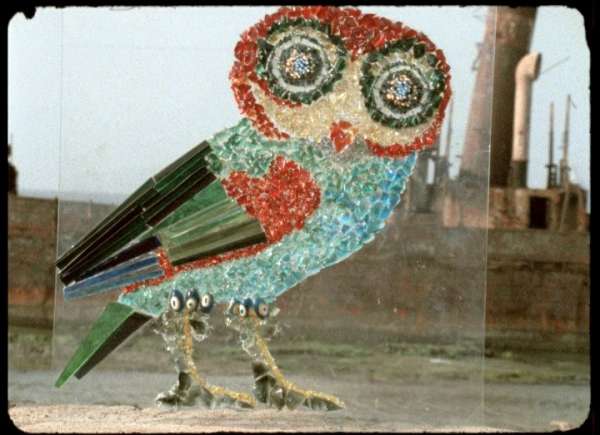 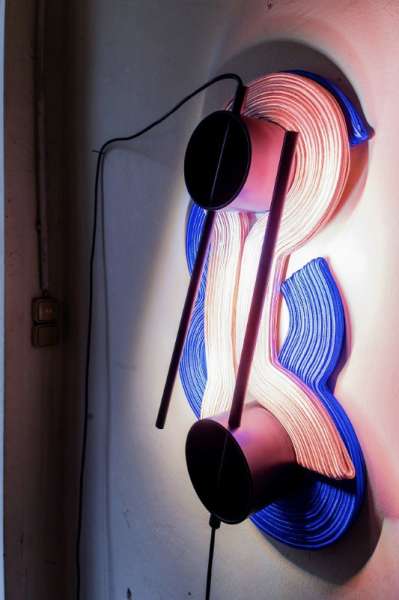 Designer Laurids Gallée used lengths of cord produced by a historic Viennese passementarie factory to create the curved forms of these lamps. Gallée took the traditional square cord produced by M Maurer – a factory dating back to 1863 – and shaped it into a series of snaking forms. These are illuminated by simple, geometric lights, which integrate subtle colours.The designer was one of five paired with different traditional Austrian manufacturers during Vienna Design Week, for a project called Passionswege. The brief was for the designers to put a contemporary spin on the companies' highly crafted products, to show how they can remain relevant in a contemporary market. 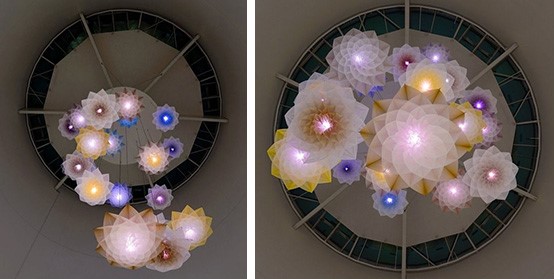 amsterdam-based studio drift has choreographed 18 mechanical flowers as part of a kinetic installation presented during dutch design week 2018. meadow is an upside down landscape that is meant to remind the viewer of the impermanence of the constantly changing seasons and characteristics of natural growth processes. the cluster of robotic flowers reacts to the visitors as if they where the sun to a blooming flower, opening to reveal a complex structure of unfolding fabric. as each one expands the light inside also grows, slowly diffusing to illuminate the entire pendant. underneath meadow integrated sensors translate the presence of visitors into different ‘moods’ with each blossom mixing the light color and the gradient color of the fabric. together they create a kaleidoscopic effect from below or an experience of a botanical creature ignited by the viewer. 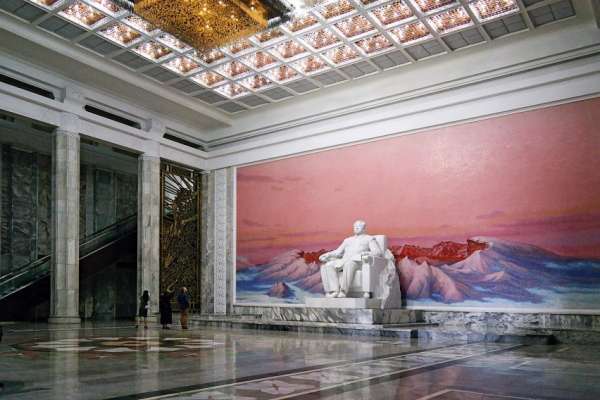 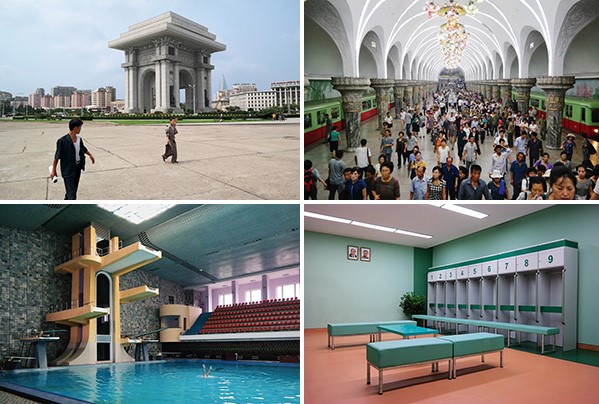 Wainwright's book, published by Taschen released on 22 June 2018, offers a glimpse inside the notoriously secretive nation. The 200 photos in the book, which are available to purchase, document the strange and colourful architecture of the country and its capital Pyongyang. Completely rebuilt after the end of the Korean War in 1953, the city is the grand vision of the country's first leader, Kim Il Sung, and contains many intriguing buildings.

from top left, clockwise: 1) Grand People's Study House, Pyongyang, 1982. A statue of the country's founding president, Kim Il Sung, welcomes visitors into the Grand People's Study House, built in 1982 as the central library of Pyongyang. 2) Built in 1982 to celebrate the 70th birthday of Kim Il Sung, the Arch of Triumph is apparently clad with 25,550 slabs of stone, marking the number of days of the leader's life at that point; 3) Claimed to be the deepest subway system in the world, at 110 metres below ground, the Pyongyang metro shares the same palatial scale and lavish decoration as the Moscow metro, with platforms adorned with marble columns and crystal chandeliers; 4) Built for the 1989 World Festival of Youth and Students (a kind of communist Olympic Games), the May Day Stadium was designed to resemble the unfurling petals of a magnolia flower, or a parachute that has just settled on the ground. It is said to be the largest stadium in the world, with capacity for 114,000 people; 5) Changgwang Health and Recreation Complex, Pyongyang, 1980, a mechanical elevator shuttles swimmers up to the diving boards behind a smoked glass screen in the Changgwang Health and Recreation Complex, a massive leisure centre built in Pyongyang in 1980. 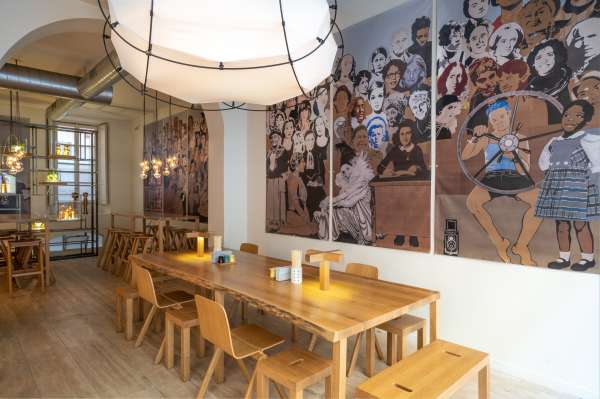 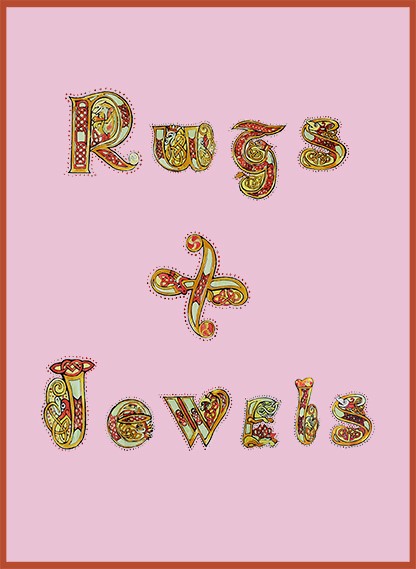 RUGS AND JEWELS, inspired by 'The Book of Kells'
an exhibition of wool silk rugs by Nuala Goodman and resin jewellery by Donatella Pellini, hosted by the Irish Georgian Society 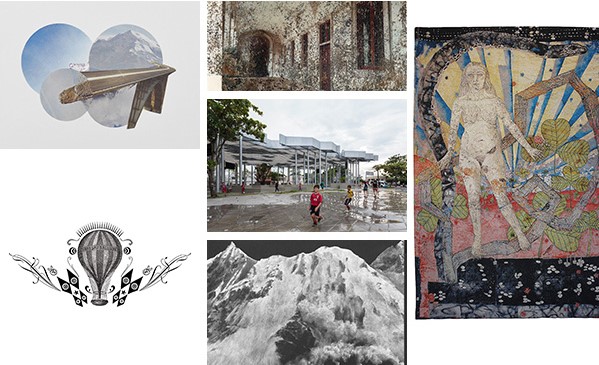 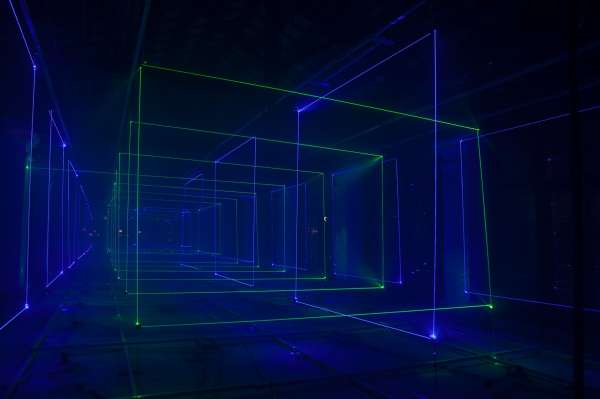 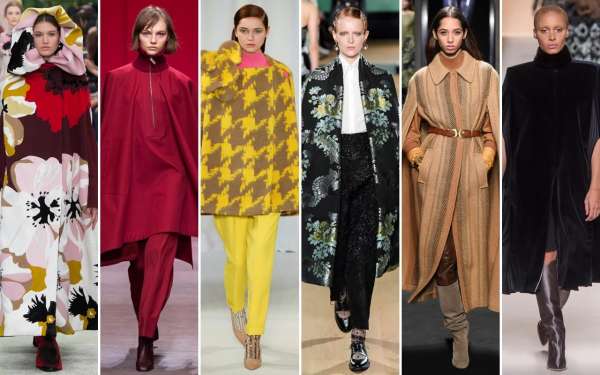 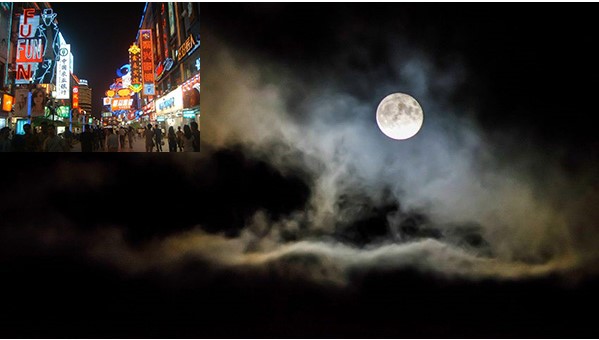 The Chinese city of Chengdu is planning to launch an illumination satellite disguised as an artificial moon within the next two years, as a replacement for its street lights. The satellite would imitate the glow of the real moon while emitting a more powerful light, able to illuminate the city's streets at night. Wu Chunfeng, chairman of Chengdu Aerospace Science and Technology Microelectronics System Research Institute, announced the news at a national mass innovation and entrepreneurship event earlier this month. Chinese newspaper People's Daily reports that the illumination satellite is designed to complement the moon at night, boasting a "dusk-like glow" that will be bright enough to replace street lights in the south-western city of Chengdu.